No question that the "fluff" behind Space Marines can make them especially devastating when it comes to the drop pod action!  With virtually every walking thing (including dreadnaughts) having access to drop pods, it is almost too hard to resist at times, putting one's whole army in drop pods, and raining down on an unmitigating foe!

With an opportunity to complete a drop pod for the Inquisition's Deathwatch, I jumped at the chance!  However, I was sorely tempted to just dry-brush the inside and forgoe doing any detail in there; happy to say I resisted the temptation... you'll have to let me know whatchya think!

(click on any pic to enlarge)
Landing on the field of battle! *Kathwamp!* 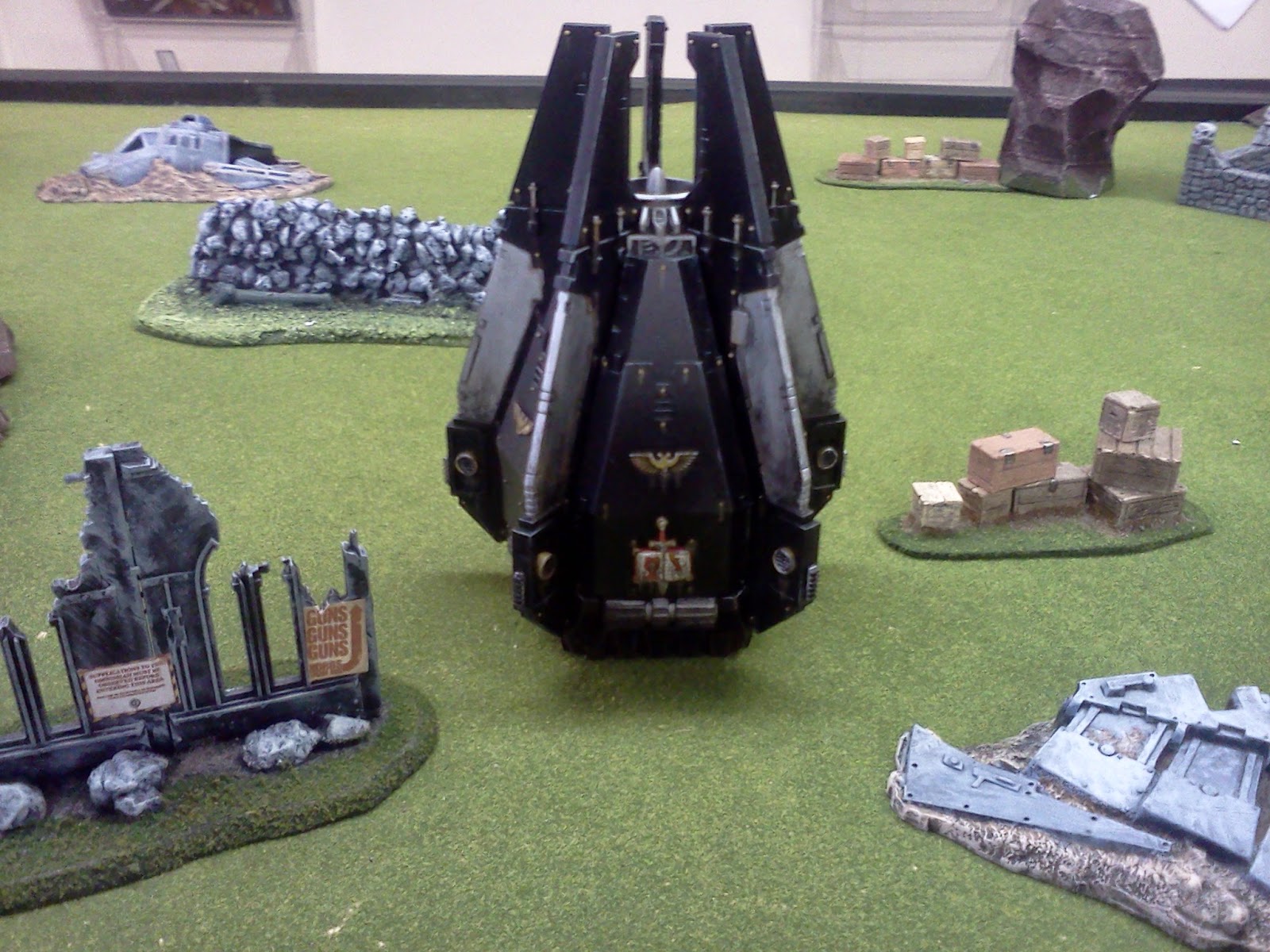 Unsuspecting Xenos, upon closer inspection might ask, "I wonder what is inside?" 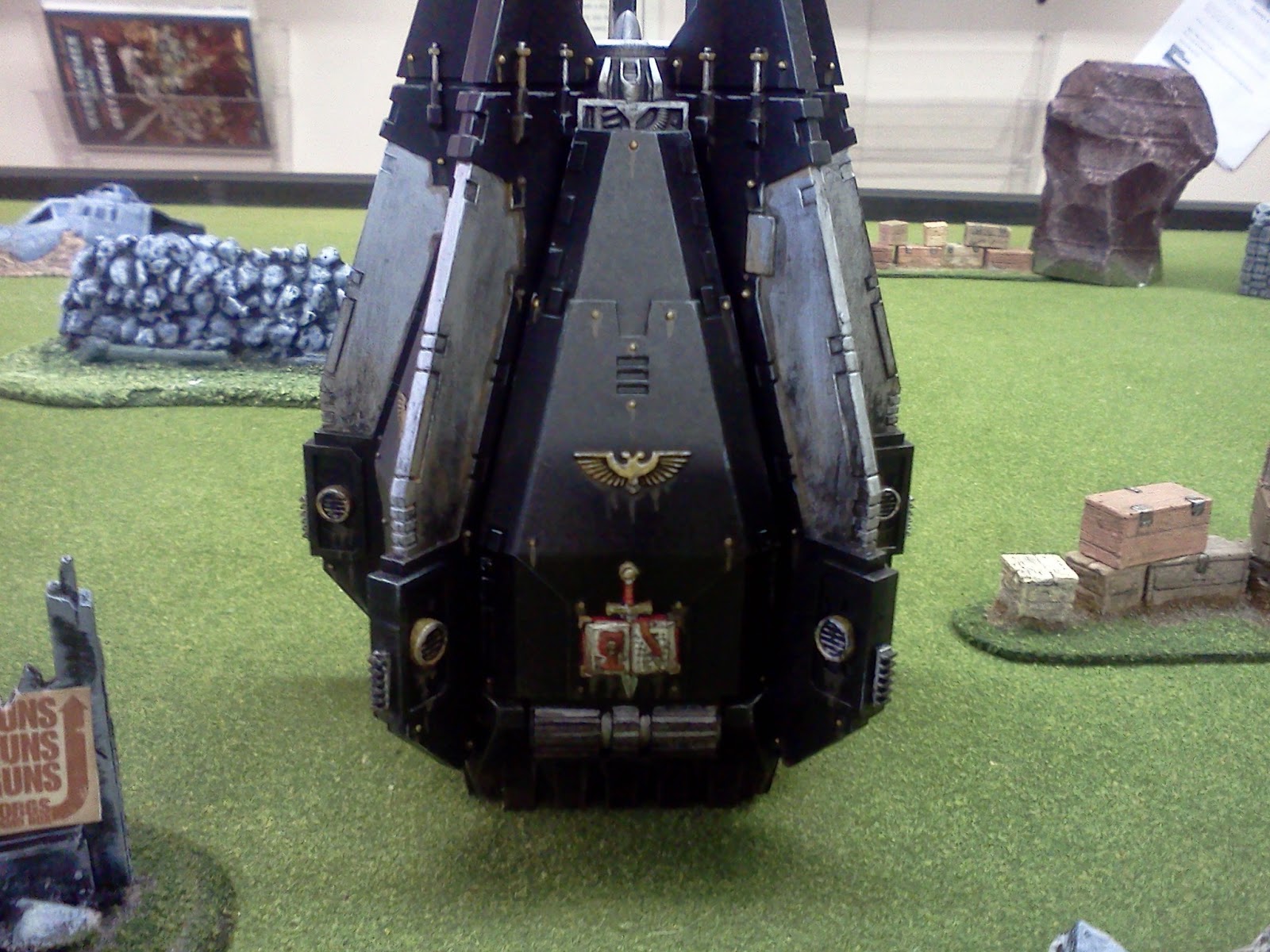 "Ooh! Look at that golden eagle with the pretty book and sword!"
(proffered I their own language of course!) 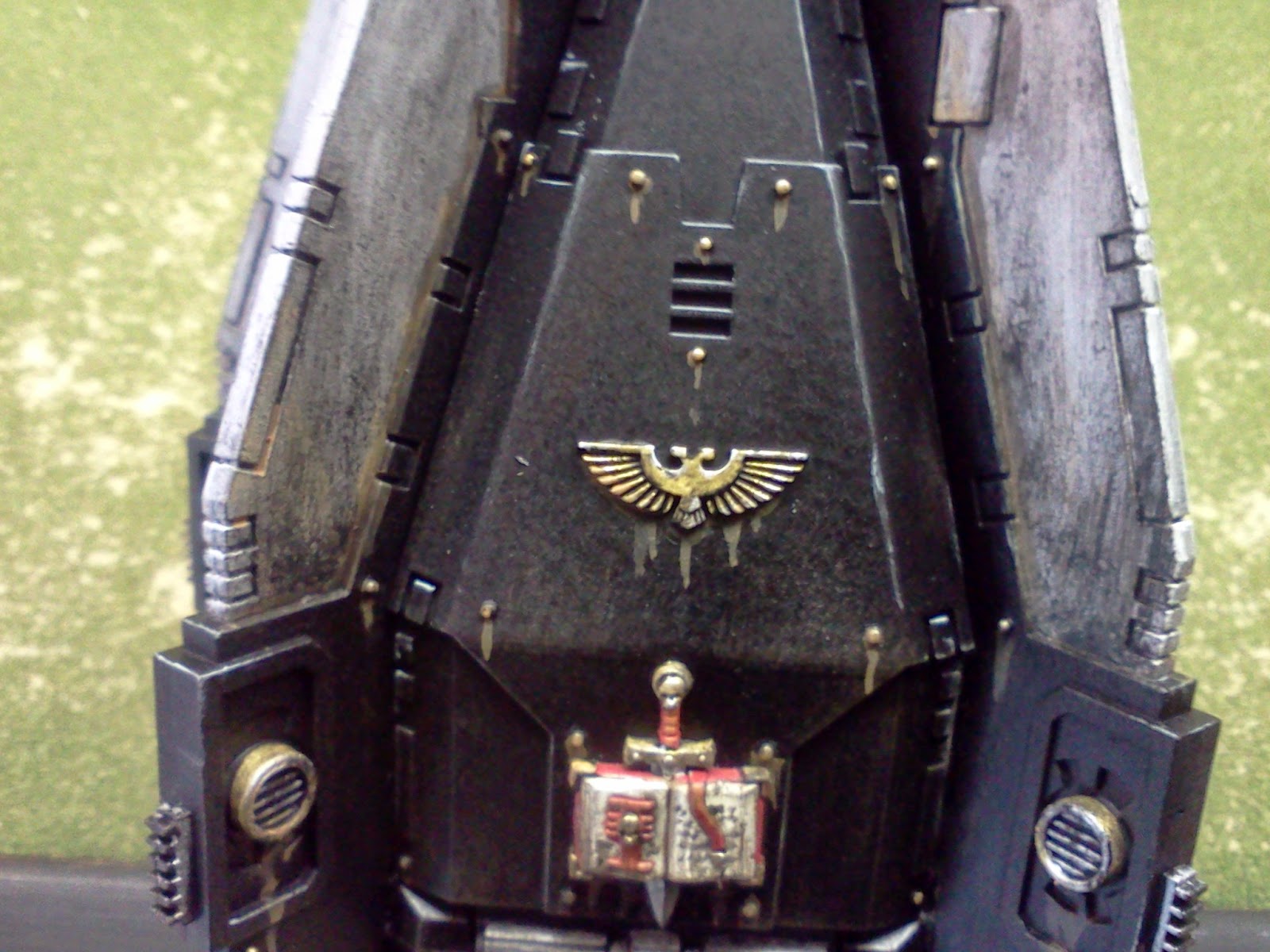 Details of the inside: yes, I went ahead and painted all the tubes, and the screens, and all the little buttons, etc... so glad I did! 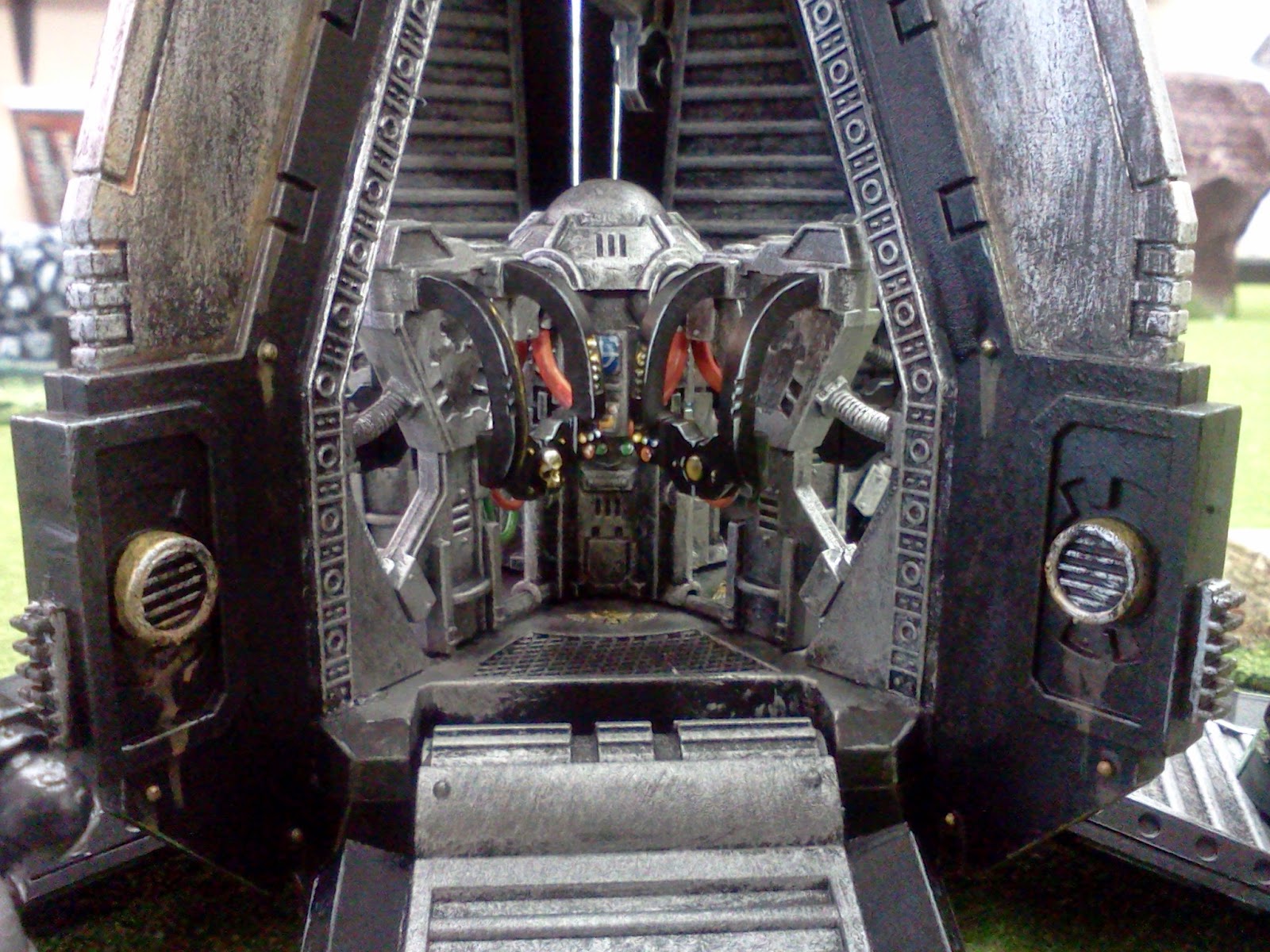 "In the name of the Emporer... you shall be vanquished foul denizon!"
Screams Sergeant Jagatun of the White Scars, as he disembarks. 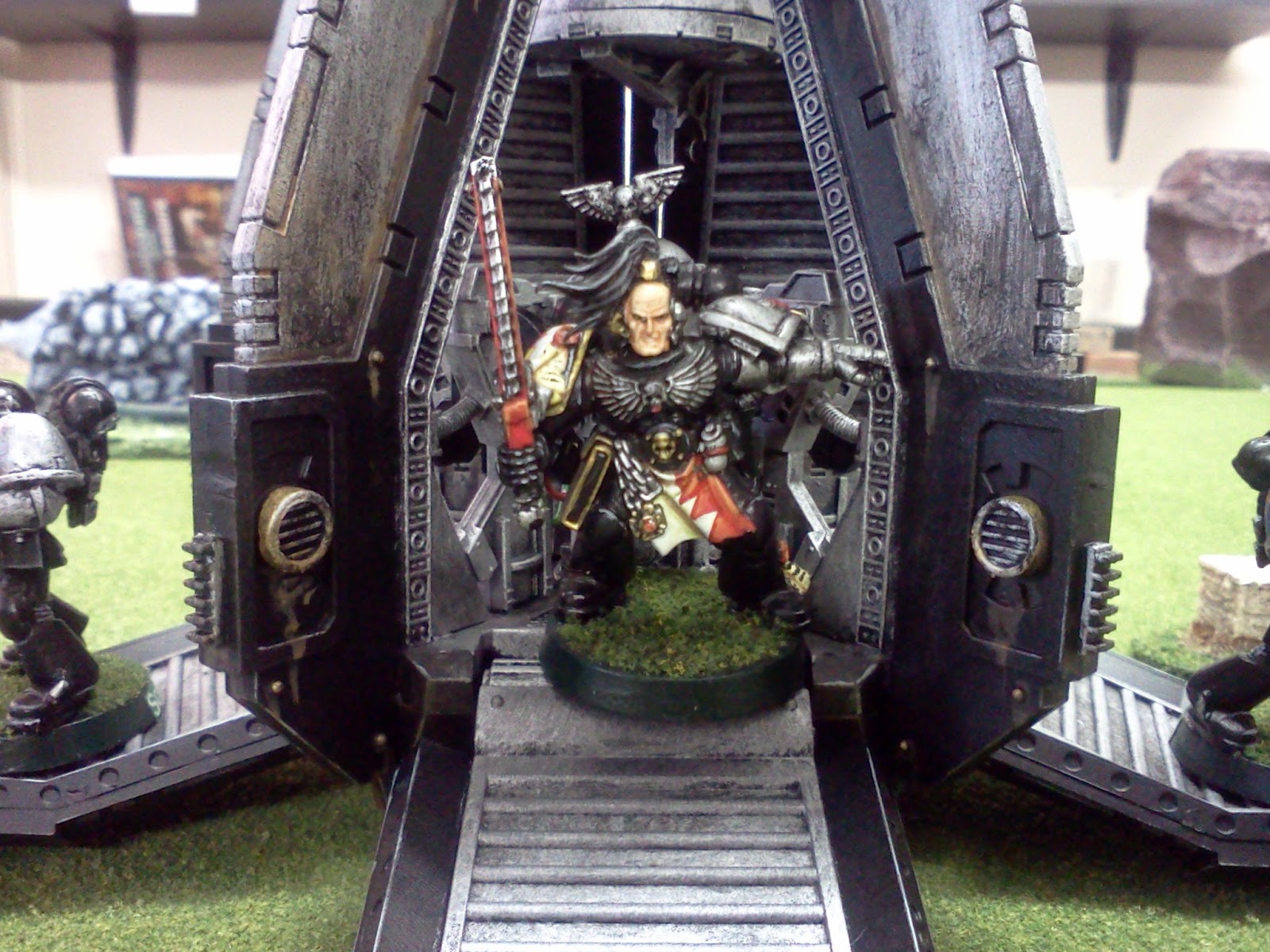 Panning away to see some of the Deathwatch Marines disembarking... 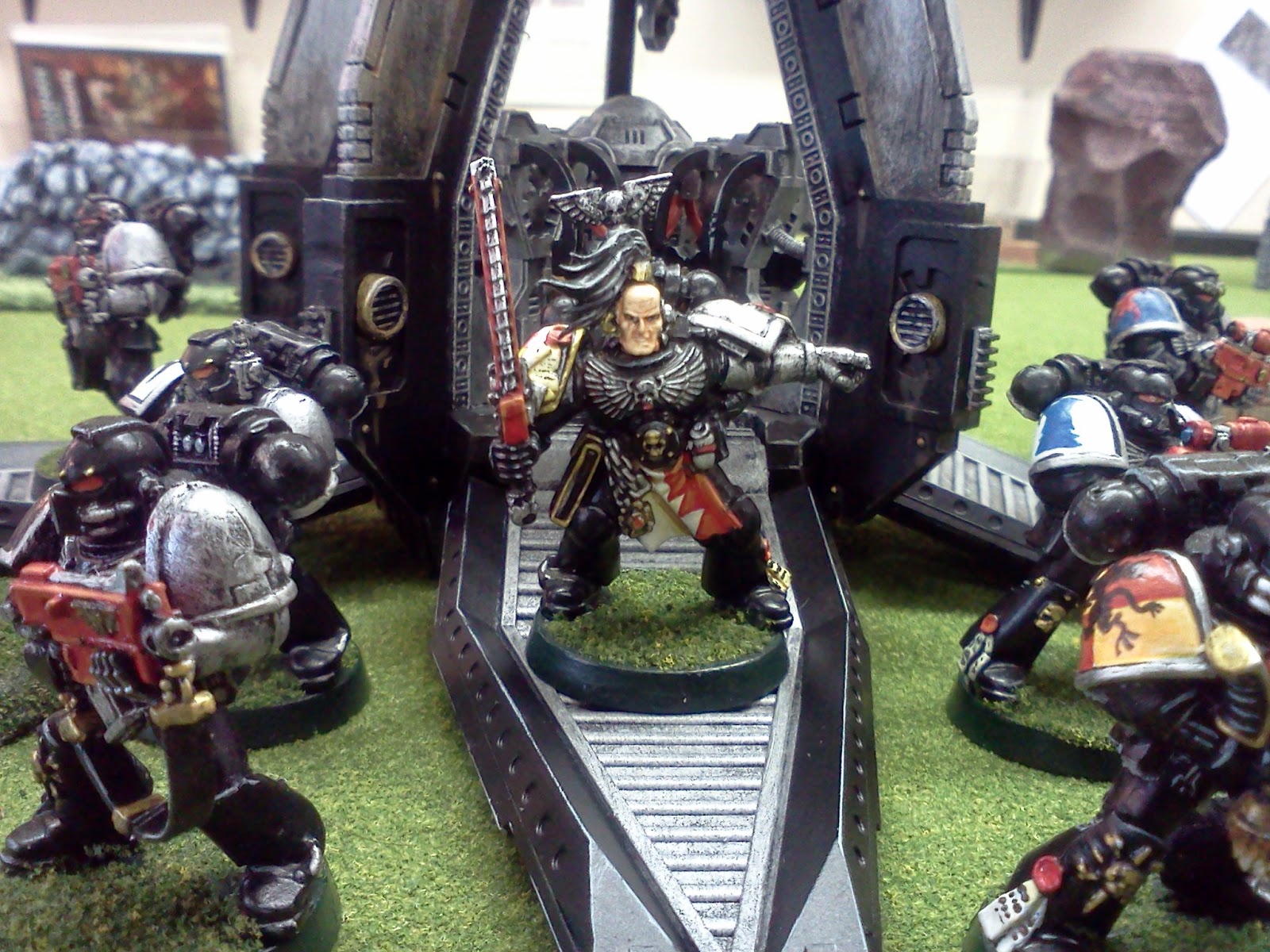 ...a full cadre of Deathwatch coming out with their nasty bolters equipped with M-40 targeters and special ammo!  Battle-brother Maxximion Voss of the Ultramarines steps out with his Heavy Bolter, while Alvarax of the Howling Griffons sports his plasma gun!  Now you know... xenos filth, what this pod contains! 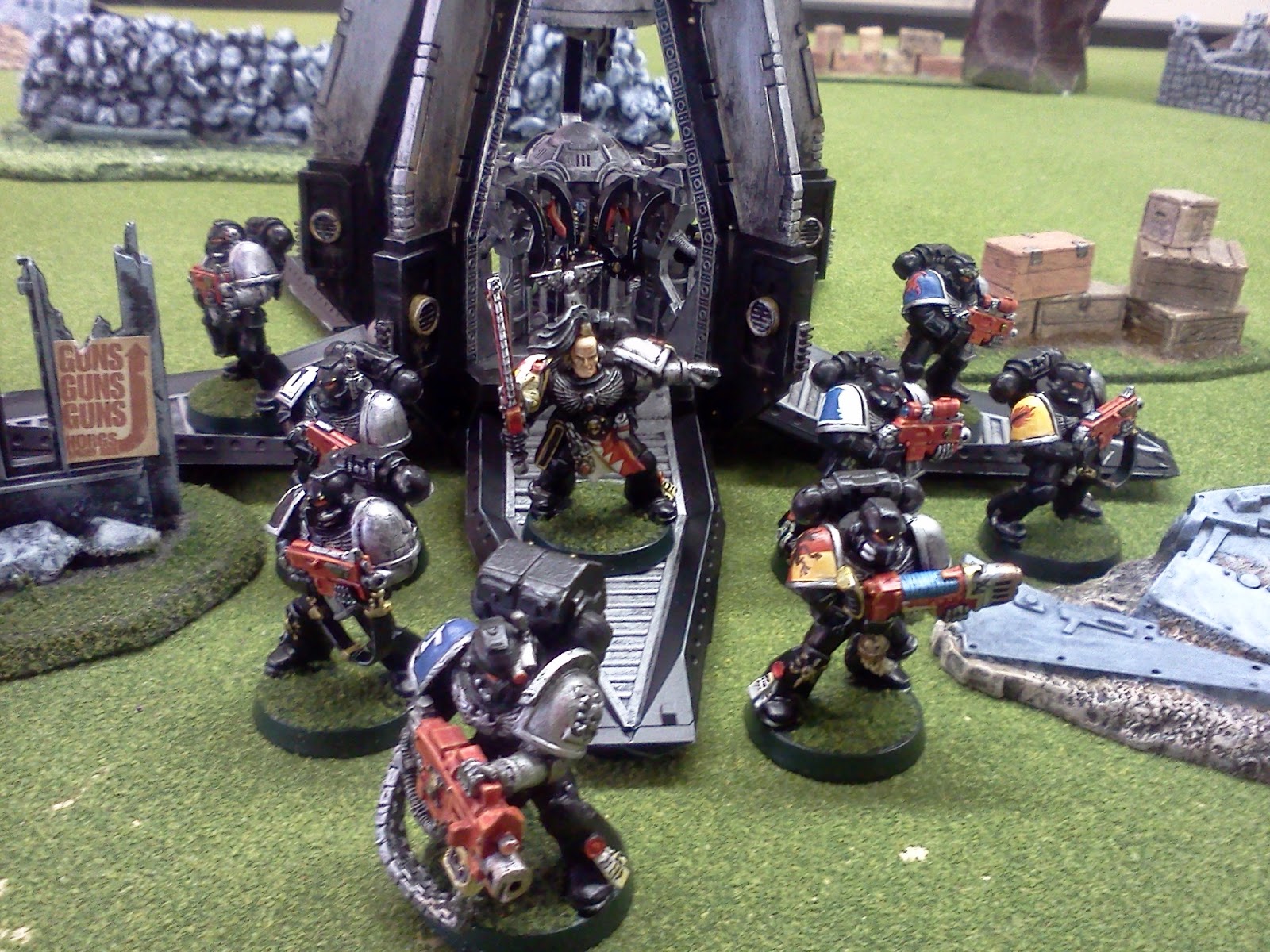 After posting the scout snipers recently completed, it is most noteworthy to mention their fearless leader: Sergeant Torias Telion!  He is the epitome of what every warrior should strive to be, both in hand-to-hand combat, as well as being a ranged threat!  With over three decades of service under his belt, in addition to his numerous accolades while in service, he has continued to refuse repeated attempts at pulling him into the elite first company.  Instead, he continues to remain in the scout companies encouraging his neophytes to exceptional service.  On one occasion, while addressing his charges assigned him in the tenth company, he reportedly uttered the following:

"Forget all your preconceptions of war, of battle-lines clashing in the churned ground. Your mission is to attack before the foe even realises that the war has begun, to strike hard at those vital weaknesses that all armies possess, but that no commander will admit to. Under my tutelage you will learn how to seek out such fragilities and smite them with every weapon at your disposal. Master these duties and I will have nothing more to teach, and you will truly be a Space Marine." 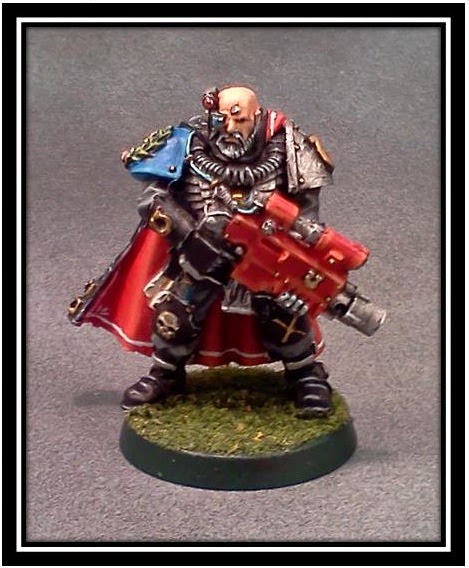 I really wanted this unique character to stand out, while fitting in with his sniper team; the simple white trim on his cloak, and red bolter seemed to tease out these elements without over-doing it.

The cammo cloak was especially fun to do, kudos to the sculptor for "tossing" his cloak over his shoulder to display his Ultramarine pride! 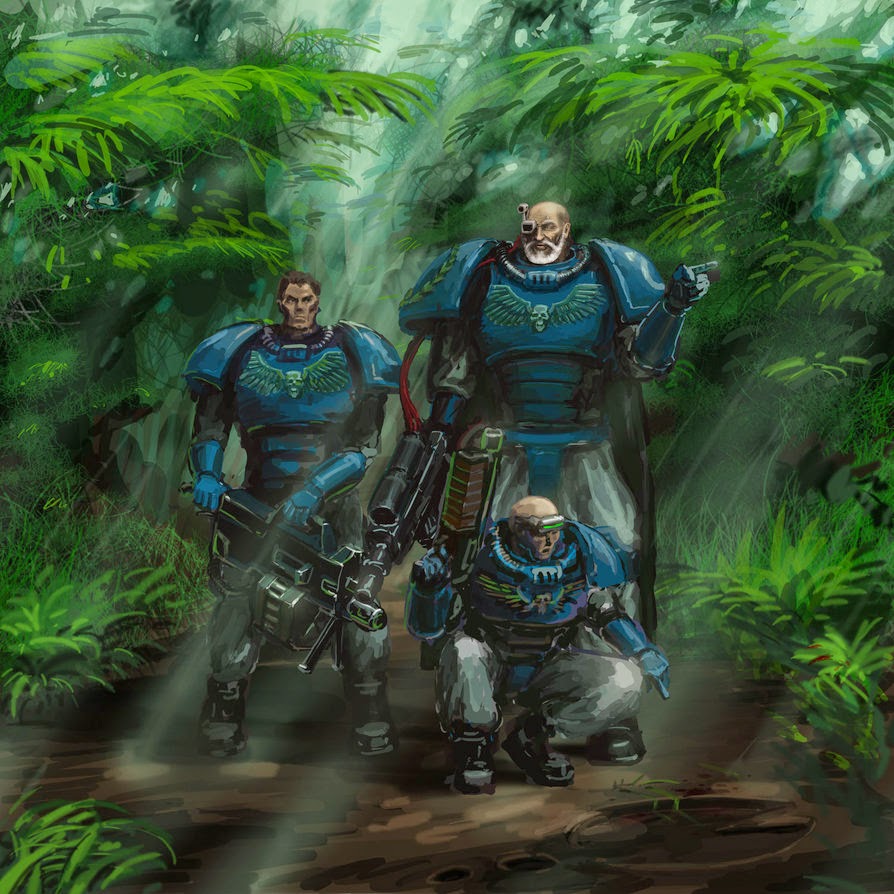 Found this acrylic of Telion using his "voice of experience" from tutzdes.
To get the full background behind Sergeant Torias Telion of the Ultramarins,
jump to this link: Torias Telion
Thanks for stopping in!
Posted by lou rollins minis at 10:38 AM 4 comments:

Scout Snipers are not effective unless they have a means of taking care of "bigger" issues... in order to accommodate for unforeseen issues that can potentially take out an entire unit, it is always nice to have a "bigger" gun!

This post has an additional scout sniper that was completed for the commissioned squad that has already been posted, but includes the Heavy Missile Launcher that will be added to the squad.  This sniper from the Imperial Fists chapter has anti-personnel, anti-tank, and anti-air missiles to fit all of your battlefield needs!

Big guns on the field!

With the targeting device this scout sniper has, little has chance of escaping his deadly cadre of missiles that he carries!

With both night vision, and heat-sensing goggles on, this scout sniper is sure to detect his target whatever the environment!

With camo-cloak rolled up, and ready for movement, this sniper is ready to creep in to position and wait... for YOU!
Posted by lou rollins minis at 4:45 AM 3 comments:

Savvy Scout Snipers: Not sure exactly why, but I have always thought the Scout Snipers for the Space Marine armies were dough!  Perhaps it is because of my personal experience serving in Marine Recon, or some of my Scout Sniper buddies in the Corps... but regardless, they are just Baaaad dudes!

I was a little concerned about the color scheme in order to incorporate them into the Deathwatch with appropriately colored attire, while maintaining the integrity of their cammo uniforms and then it hit me... duh!  *Shazam* Urban cammo! 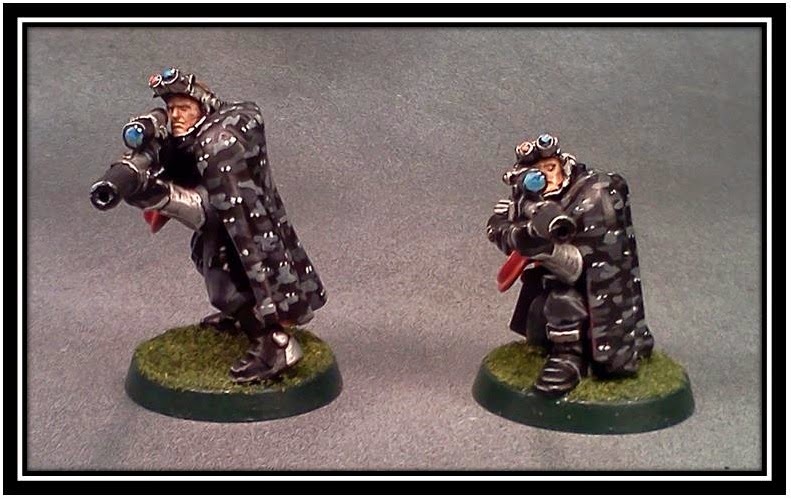 Scout Snipers sighting in on their targets, ready to pull the trigger! 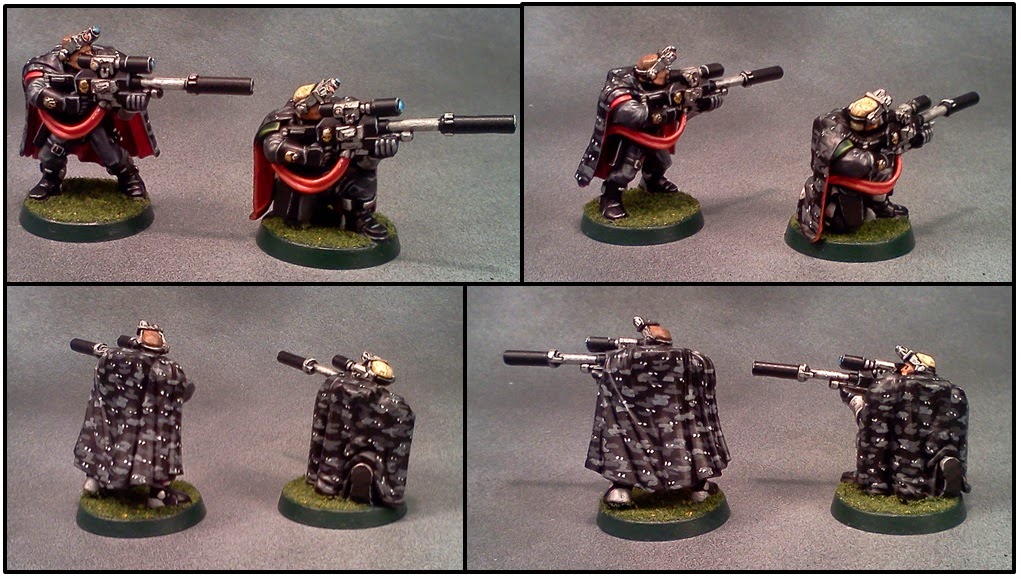 Was a bit nerve-wracking to get the urban 'grey' cammo cloaks completed, but after I finished the first one and saw how cool he turned it, I was motivated to knock out the second one! The interior red, was a perfect finish to the Deathwatch black, red and gold color scheme.  Can't wait to see them on the battlefield!
Posted by lou rollins minis at 6:47 AM 9 comments:

Truth be told, I have been able to get quite a bit of work completed during my brief hiatus; and this post was supposed to be a ways out... but he turned out too cool to not share him!  I have been completing a series of projects for different clients, but the Space Marine Deathwatch army has been a true joy!  Comprised of different Space Marines from different chapters, it makes the fun, fluff and flair to fun to ignore!

This is a Space Wolf Rune Priest that was completed, which has been seconded to the Deathwatch to serve over a kill team.  Shredding his Space Wolf Grey, and donning the Deathwatch Black is especially hard for the Sons of Russ, but they never ignore there call to serve!  The model is actually a converted Njal Storm caller from third edition... and here he is! 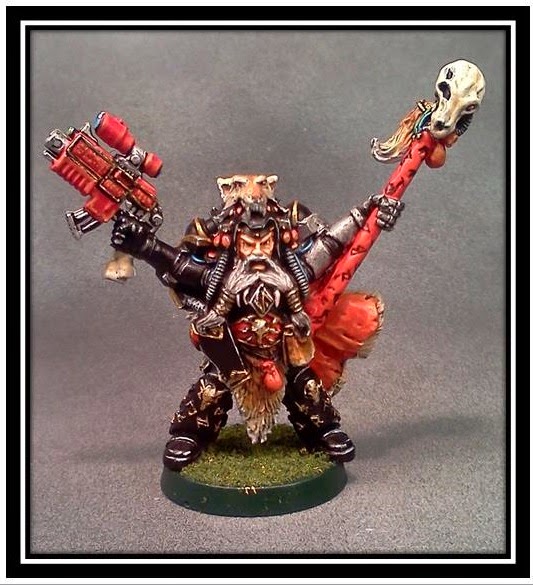 I love the dynamic spell casting pose of this model!  (I wonder if this is where Gandalf got his dramatic pose for the movie because this model predates him!)

I was a little trepidacious about the runes on his armor and staff (I have painted this mini before), but I am pleased with the results! :D

With all of the wolf tassels and pelts, it was a bit nerve-wracking to get the blends on the fur as I like them... but after patiently working through them, I think the effect is worth the effort!  What do you think?
Posted by lou rollins minis at 5:35 PM No comments: