A few months ago, Games Workshop announced new rules to bring back the Officio Assassinorum in the table top game Warhammer 40,000 (or 40K) as a playable force.  They have been unplayable and virtually absent for almost two whole editions!  It has been so fun bringing back these operatives and, as an Inquisition player, they have been a nice-flexible contingency unit(s) to add back into my Deathwatch army!  The new rules, and ability to bring them as a one-off force, or as a whole Vanguard attack force, has been fluffy fun but also game changing at times.  Here is the quad left to right: Culexus, Vindicare, Callidus, and Eversor! 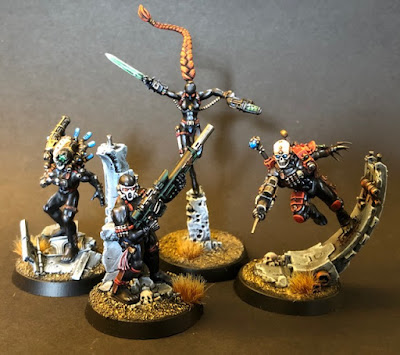 Deployment of one (or all) of the Officio Assassinorum can strike fear into the heart of an opponant! 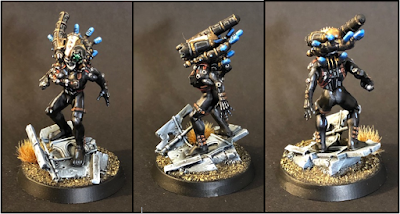 The Culexus Assassin's Animus speculum can target Psychers with deadly accuracy, but his "soul horror" presence can cause the enemy to freeze with fear, while their allies hack down the foe in hand-to-hand combat! 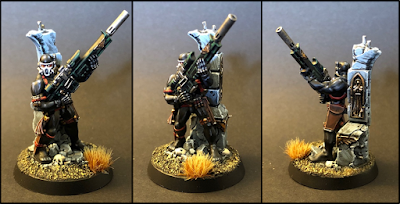 The Vindicare is a sniper-extraordinaire: with his spy mask, and Executor Rifle coupled with turbo penetrator rounds, no Leader, Captain, Sergeant, or Field Commander is safe from his deadly aim!

The Callidus Assassin is uniquely equipped with Polymorphine drugs enabling her to "shape-change" and assume the identity of enemy combatants and leaders... think that is a Commisar leading your troupe? Think again!!! She materializes out of nowhere, taking the lives of those that oppose the Emperor of mankind!

The Eversor is a Hyper-metabolised Assassin, equipped with an executioner pistol and neurogauntlet, able to get into to close-quarters in the blink of an eye! One minute you think you are safe... the next moment you are dead!

Hope you enjoyed glancing at these models!
Here is a link to more info on the assassins with the info about each temple they come from:
https://warhammer40k.fandom.com/wiki/Officio_Assassinorum